SO yesterday we had Faith's hospital visit to have a pill inserted into her small intestines.  This pill can disintegrate so if it gets stuck, it will dissolve.  Well, I have not posted the picture that Jesi had me take this morning, but this huge pill made it through Faith overnight.  It was no fun to clean up the mess, but it passed through without any big problems.  Faith was uncomfortable at times, but now we know the camera pill can be inserted the next time she bleeds so we hopefully see the where the bleeding is occurring inside of her small intestines.  I would post the picture, but it is rather disgusting as I am sure that you can imagine.  The procedure was a success and hopefully will help us find a solution to this bleeding issue.  Faith has now had 5 blood transfusions.
Posted by FAITH at 1:45 PM No comments:

Faith is having a procedure done this morning.  They are going to insert a capsule that will take pictures of her small intestines. We are trying to find the source of her bleeding so pray that God works through these doctors.  This picture has our One Hit Wonder nurses who got Faith's IV into her in one shot. We always appreciate nurses like this. 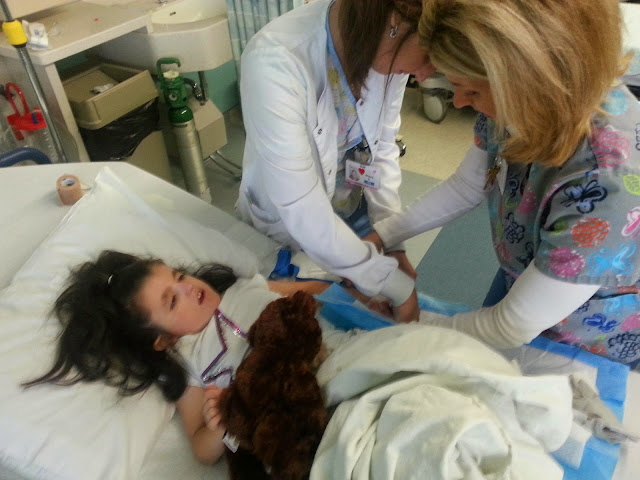 We just found out that the University of Michigan Mott Children's Hospital is going to feature Faith in their Gift of a Bear program fundraiser this year.  Her story will be feature in a video like the one linked below.  They also will put her on a mailer sent out to between 30,000 and 100,000 people.  We are scheduling a photo shoot for this coming week.  The video shoot will probably be done in September.  Check out the links below to see their website and the type of video they will shoot.  This could come in very handy to help promote the Trisomy Clinic at Mott that we are working on with Dr. Glenn Green.

Gift of a Bear video:
https://www.youtube.com/watch?v=aW_1MJspy7M&feature=youtu.be

We Thought They Were Helping...

I was asked to write a blog on Slow Code for our SaveThe1.com blog.  Rebecca Kiessling sent the blog to LifeNews.com who posted it today.  It has been shared over 8,600 times as I am writing this.  If you would like to read it and share it, here is the link.

Check out this amazing TED video about medical innovation. https://www.youtube.com/watch?v=KL8rQp8QxNY Dr. Glenn Green is Faith's ENT at Mott Children's Hospital. He did Faith's jaw distraction, and here is a before and after picture of her results from surgery which had a similar impact on her life as the boy in the video. http://littlefaithtobigfaith.blogspot.com/2012/01/jaw-distractionbefore-then-after.html
This is why we need to fight to keep our American health system and remain the innovators. We can only do this if we LOVE and RESPECT life.  Our current nationalized health will only take us off this path of leading the world in medical advancement.  I don't say this out of hyperbole, rather experience.  When Faith was born, the first hospital told us that we would have to go before an ethics committee to ask for permission to have heart surgery for Faith.  Not only do these panels have the ability to withhold care, but they often don't let the patients / parents be involved. They also have secret ballot votes when deciding the fate of the patient.  I don't know about you, but I call this a DEATH PANEL.  We opted to change hospitals and not work with that hospital any longer.  We have friends who have a child like Faith and they went through this horrible process.  By fighting, they got surgery for their little girl which was successful.  Even after success, they were told "don't think that we will do this for other Trisomy 18 children."  This particular hospital was chosen by the Obama administration as a "model" hospital to help launch their nationlized health care.
If we do not fight, we WILL see far more people dying.  We, personally, have watched 2 children die because hospitals with this philosophy deceived the parents to think there was no hope.  Right now, we have the ability to change hospitals and seek treatment, but if the Obama administration has its way, we will ALL be forced to use hospitals like the first "model" hospital where we faced the withholding of treatment.
Posted by FAITH at 9:46 AM No comments:

﻿
﻿
Doesn't she look like a little girl who will never enjoy life and will only be a burden to her family?  The geneticist warned us that this little child would destroy our marriage.  Well, he's right....without Christ.  That is what is great about serving Christ...He makes a way where there seems to be no way.  Faith has only made our marriage and family stronger because we put our trust in Him.

5 years ago Faith was born on December 23, 2008.  We actually chose the date for inducement.  We could have picked Christmas Eve, but it is also my birthday and I wanted her to have her very own day so we picked the 23rd.  We spent that Christmas in the hospital with specialists coming to see her.  The original cardiologist came in on Christmas Day to examine her.  He discovered several holes in her heart including one so large that the blood flowed through it without causing a murmur.  Well, they didn't know at the moment that Faith had Trisomy 18 so they took care of her like a little girl.  It wasn't long after this that we got her T18 diagnosis and quickly found out how the medical industry would not help her.  This began quite the journey and learning experiences over the past 5 years.

We are so grateful to God for his faithfulness and continue to pray that He will complete the work which He has begun in Faith.  HAPPY HAPPY HAPPY 5th Birthday Faith....we love you and would go through it all again!
Posted by FAITH at 9:20 PM 2 comments:

HAVE YOU EVER HAD AN AWKWARD MOMENT....yet appointed by God

I had the most amazing opportunity earlier this evening; at the same time, it was one of the most awkward situations in which I have ever been.  It all began yesterday.  A friend who was hired by the RNC invited me to an event that he had organized.  RNC Chairman Reince Priebus was attending the event with many other Detroit area community leaders so I decided to go.  While I was there, I met several new people including a doctor from the DMC (Detroit Medical Center).  DMC runs Children's Hospital in Detroit where we were denied proper care for Faith.  We have other friends who experienced the same problem at DMC.  So, I mentioned to him our story about not receiving care for our daughter and getting the Medical Good Faith Act passed because of this experience.  I wouldn't normally have said this upon just meeting him, but there was something about this doctor that I liked from the start.  He was troubled by our story and invited me to attend a meeting scheduled for tonight to share our DMC experience with other DMC doctors. I told him that I might, but I wasn't sure because I have been going to so many events and I'm exhausted.

Well, I emailed him this afternoon to say that I would come to the event.  It started at 6pm and when I showed up, I did not see the doctor who invited me.  Another doctor saw me and could tell that I didn't belong and started a conversation with me.  I explained that I had been invited and why the other doc invited me.  He was troubled by our DMC story and experience.  Others started arriving and could tell that I didn't belong including one of the assistants who asked me for my name.  A few minutes later two of the men came over to me and took me out of the room.  Perplexed, they asked me why I was there so I once again explained.  I let them know that I did not want to disturb their meeting and I wasn't even sure what I was doing there.  But after hearing my story, they asked me to stay and share for 10-15 minutes with the group.

One of the men who came to speak with me opened up the meeting and explained some of what they would be covering during their meeting.  The other man who spoke to me outside the room was a doc.  He then introduced me to the group and explained that I would share my story so I did.  I told them how we were denied treatment and how others at DMC had experienced the same.  I talked about how Rafaella's family had to fight to get heart surgery for Maristella.  Many of their reactions were of disappointment and I could see that they were troubled by these stories.  I was very respectful, but blunt and I pulled no punches.  I told them that I admire the hard work it takes to reach their position, but I also understand that they are practicing medicine and don't have all the answers.  I told them how much influence they really have and how people trust them.  I explained how we have tried to get parents out of hospital systems, but couldn't get the parents to leave because they trusted their doctors even when they should not have.  The doctor who introduced me then thanked me for sharing and said they would be in touch because he wanted to continue this.  He then explained to me that this group of doctors is an advisory committee to the president of DMC.  The president of DMC was the man who opened the meeting and had pulled me out of the room before the meeting.  The original assistant followed me out and got my contact information so she could get in touch with me.  By the way, the doctor who invited me never showed up to the meeting and now you know why it was so incredibly awkward (he's gonna hear about it :).  Even if he had been there, I would have felt awkward, but I knew God opened this door and I had to walk through it.  This group of doctors deals with adults and not children, but I may have just kicked a hornets nest.  I pray God continues in this and that this part of our story is just beginning.

By the way, Faith is doing well and is walking around right now in her gait trainer.  Of course, she is slamming into everything and destroying the walls in my house which drives me crazy.  I'm glad that she drives me just as crazy as my other children.  Also to update our first public speaking engagement of this type, we spoke to the Central Michigan Right to Life group last week.  We received a very good response from the crowd, and the next day I received an email from the state Right to Life offices which asked us to speak at their legislative day in Lansing on March 11.  We will be speaking right after the lunch to legislators and other directors for Right to Life of Michigan throughout the state.  God is certainly opening up doors.  We are made righteous by Him, and the steps of a righteous man are ordered of the Lord.